The first meeting of the Moonka founders took place over 20 years ago - in a completely different set up, completely different circumstances. However, it resulted in years of friendship and a joint project in 2020. In November, Ewa Kwiatkowska, Ewa Pietruszczak and Barbara Pietruszczak shared their idea with the world, which, as they say, was created out of empathy for girls and women.

The plans to prepare a body-positive guide had been made much earlier, but none of the founders had any publishing experience and there were still many unknowns. Despite this, they decided to trust their intuition and in the fall they started a fundraiser. During its duration, more than PLN 85,000 (almost 19,000 EUR) was collected, ie 190% of the originally assumed goal. From the very beginning, almost 1,000 supporters were involved in the project - people who had never had physical contact with the product, because it did not exist yet, and yet trusted the organizers of the campaign. And that was just the beginning! 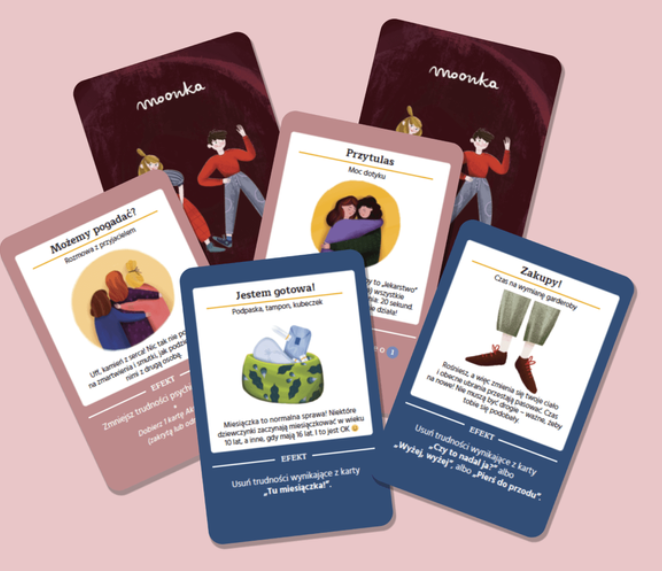 The author of the body-positive guide is Barbara Pietruszczak, a journalist dealing with the subject of broadly understood corporeality, including topics related to puberty. Basia works on Instagram as @panimiesiączka (Mrs. Menstruation), where she translates and educates on issues related to menstruation. In addition, she writes about the body in the magazine "Kosmos dla dziewczynek”.

The book was published via a self-publishing arrangement. The pre-sale ran from February 10 to March 14, which was a huge success. But it doesn’t end there! Regular sales also exceeded the expectations of the founders - on March 24, exactly one week after its launch, the entire circulation was sold out. Fortunately, a quick reprint saved the situation and orders are being shipped again from April 12.

Since the book was self-published and it was the first of its kind among the founders, they knew from the start that they would need to seek support in many areas of their business. Lots of companies, for which moonka could be a competitor at first glance, supported it from the operational side. People believed in the legitimacy and power of the project.

The decision to choose a logistics operator

moonka knew from the very beginning that logistics would be realized through fulfillment. A multitude of tasks, a limited group of people and ambitious development plans did not leave too much time to deal with logistics issues on their own.

3 main factors determined the choice of Omnipack as supplier:

Before regular sales began, at Omnipack we faced the task of sending pre-orders. Over 2,000! Before the first shipments were processed, we had to take care of the smallest details - we conducted shipment tests, waited for the full inventory of the warehouse (not only of the products themselves, but also of the inserts added to orders) and packaging instructions, thanks to which our customers can be sure that each order will be packed in accordance with their guidelines.

Pre-orders were to be shipped to customers after March 16th. Together with moonka, we started operating a few weeks earlier, which allowed us to prepare orders in advance. Finally, all pre-sale packages were delivered one day ahead of schedule, March 15th.

Regular sales have started on March 17, and we are already servicing them on an ongoing basis. We completed the entire backlog of orders, and when everything was going smoothly, the circulation ran out ... and the orders kept flowing. We started April with the efficient implementation of the order backlog and the ongoing handling of shipments. 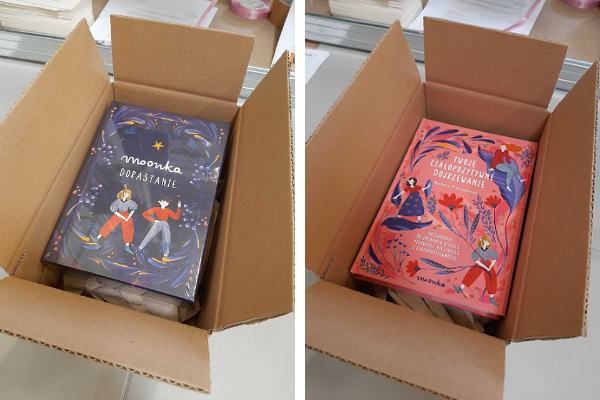 The Moonka project started its activities around the topic of girl puberty, but this is just the beginning. From day one, the store was filled with questions: "When will there be such a book for boys?" And because the founders of Moonka dream that each child can grow up according to their internal needs, to create a sustainable world in which everyone is what they want to be, in May 2021 they launched another community fundraiser under the slogan "moonka - now for boys" .

Although in the West, body positivity and the topic of maturation are more popular and more often raised in the public debate (which is also reflected in the products available on the market), moonka does not exclude the possibility of extending sales to foreign markets. Currently, with the help of Omnipack, it offers international shipping, but it is an offer addressed to Poles living abroad, because the book and the game are available only in Polish. However, there are plans to translate both items into foreign languages ​​and expand into foreign markets, in which we will be happy to help with logistics.

moonka explains maturation. It accompanies girls (and soon we hope boys too) to prepare them for puberty. moonka supports them so that they do not experience loneliness, shame and fear associated with the changing body during puberty. It educates and breaks the taboos around femininity so that girls do not lose their natural self-confidence and trust in their bodies. That their body would be their home and natural friend.

Customer satisfaction is the brand's greatest success. There are tons of great comments on moonka Facebook, which are the best proof that such a product was really needed. We are happy that, as an Omnipack, we can help moonka change the world!

Proper temperature, monitoring of product expiration dates, and necessary certificates. What does foo...

Omnipack has been working with the Gepetto brand for two months. Since then, we’ve only built on this...

In some issues, fashion customers are more demanding than in other industries. They notice slight def...

Black Friday at Omnipack. How Did We Succeed in Handling All of Our Customers’ Orders?

This year's Black Friday results have...

RunnersClub is a store for running enthusiasts. Recently, they’ve become one of Omnipack’s merchants....

Daquïni produces designer activewear essentials sought by women all over the world — from the United...

What to Do at Home During a Pandemic? #stayhome and Support Local Brands

Being forced to spend time at home do...